Some Past Solo Performances

"She is either the most talented performer on the autoharp who regularly teaches, or she is the most gifted teacher who actively performs." —Autoharp Quarterly

Karen Mueller is one of the top autoharp and mountain dulcimer players performing today. Her exciting and innovative performing style, featuring Appalachian, Celtic and contemporary music, has been applauded by critics and audiences from LA to Boston. Bluegrass Unlimited magazine has said "Karen Mueller's touch, timing and taste make her a true virtuoso. Her talent and clarity...deserve a wide audience."

Karen won the 1986 International Autoharp Championship and was a National Dulcimer finalist in 1985, both at the Walnut Valley Festival in Winfield, Kansas. In 2006 she was inducted into the Autoharp Hall of Fame. A native of Winfield, she first attended the festival while in high school and was inspired to learn to play the autoharp and dulcimer by the performers she saw there.

Karen is a 2012-13 recipient of a prestigious McKnight Artist Fellowship for Performing Musicians. She is an accomplished multi-instrumentalist; besides autoharp and dulcimer, she plays guitar, mandolin, Irish bouzouki and ukulele. In 2000, the Minnesota Bluegrass and Old-Time Music Association awarded Karen its “Recognition of Excellence.” She has also been an official showcase artist at the North American Folk Alliance Conference. While touring extensively as a soloist, Karen also performs in numerous ensembles, including with Katie McMahon, original lead singer of Riverdance.

Based in Minneapolis, Karen is in demand as a performer, instructor, school residency artist, and studio musician. She gives private lessons online to students of all ages and levels- visit the Instruction page for more information. Karen also enjoys working with older adults in a wide range of settings. In 2011, Karen and residency partner Southwest Senior Center/Volunteers of America received the Minneapolis Arts Commission's "Special Award for Outstanding Contribution to the Arts in Community" for their dulcimer building and performance project.

Sing Out! magazine says ''Mueller takes the autoharp into unfamiliar places ... stellar ... a delightful change of pace. Never before has an autoharp player so successfully crossed so many musical boundaries, uniting the speed and drive of bluegrass, the lilt of Irish jigs, and the rhythmic innovation of contemporary and world music, all marked by impressive musicianship.”

“In the hands of a few gifted people, the autoharp can swell into the sound of a whole orchestra. Karen Mueller is one of those few.” —Minneapolis Star Tribune 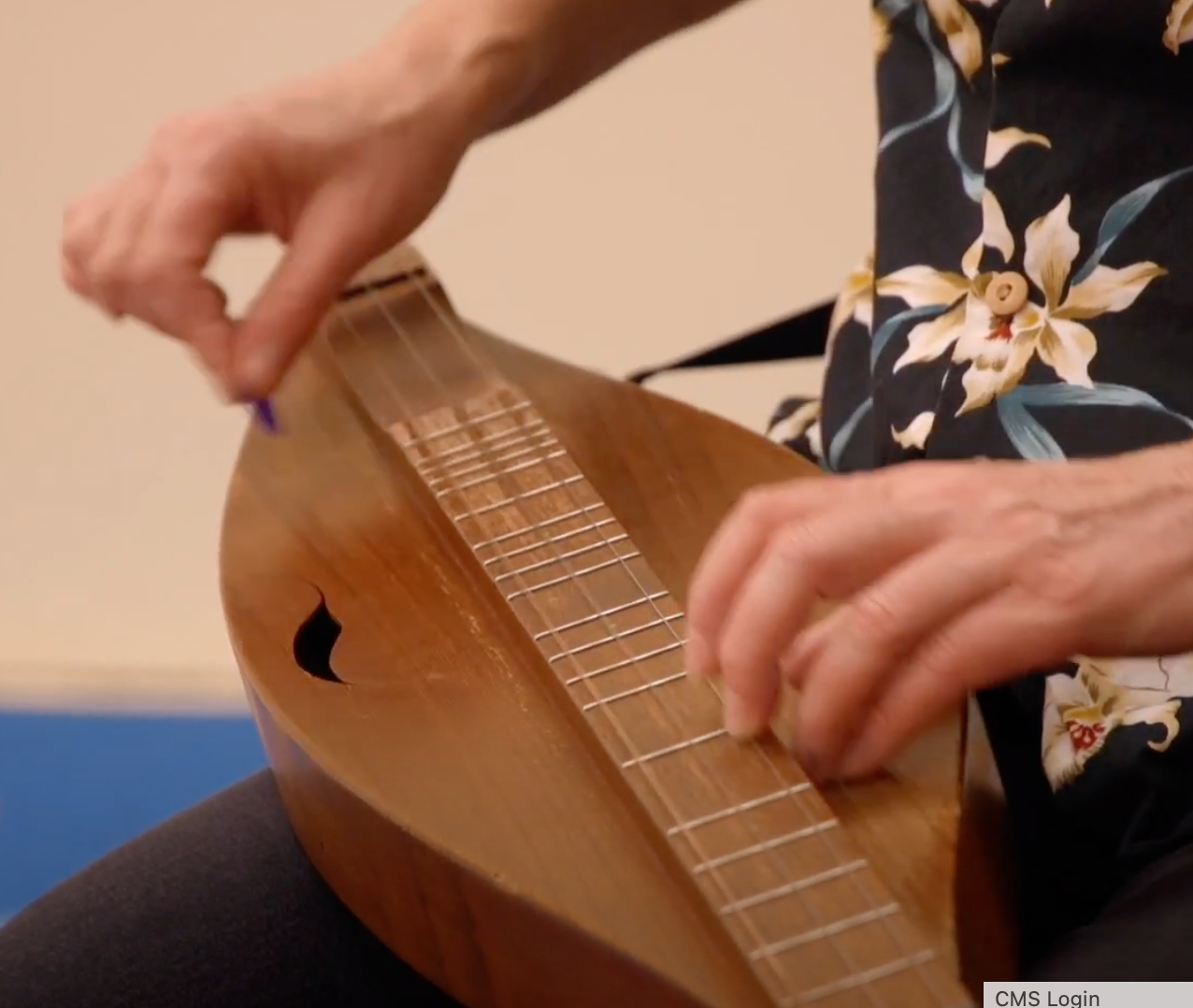 Karen Mueller bridges many mountain dulcimer traditions to formulate her own dynamic style. She started playing the dulcimer in 1979 by learning the innovative tunes on the Pacific Rim Dulcimer Project record, featuring Neal Hellman, Force & d'Ossche, and Bonnie Carol. From there she began adding traditional Appalachian and Celtic music to her repertoire, and developed her own arrangements of these styles as well as pop, jazz, and original material. Her techniques range from rhythmic flatpicking and strumming to sensitive fingerpicking. Karen grew up in Winfield, KS, home of the Walnut Valley Festival, and was introduced to the dulcimer and autoharp there. She has been a finalist in the National Mountain Dulcimer competition, and first-place winner in autoharp, both at Winfield in the mid-1980s.

Today she is a full-time performer and instructor, and has travelled throughout the US and England teaching at major workshops and festivals. Karen has released six solo recordings and several instruction books, including "Favorite Dulcimer Arrangements," and is featured on two volumes of the "Masters of the Mountain Dulcimer" CD series. She is an active teacher of private lessons, school classes and residencies, and also performs with Irish singer Katie McMahon, the original lead singer from Riverdance. In demand as a multi-instrumentalist, she plays and teaches guitar, mandolin, ukulele and Irish bouzouki in addition to dulcimer and autoharp. A skilled and experienced instructor, Karen is able to work effectively with all levels of students, from new players to advanced. She has also performed the challenging Blackberry Winter dulcimer concerto twice with Minnesota orchestras.